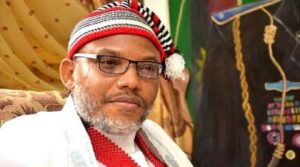 Kingsley ‘Kanunta’ Kanu, brother of Nnamdi Kanu, founder of the proscribed Indigenous People of Biafra (IPOB) on Tuesday, told the international community that the Nigerian Government has been “misleading” them.

Kingsley was reacting to the non-stop mindless killings being witnessed in the southeast region, particularly Imo and Anambra states.

YOU MAY ALSO LIKE:   Organizers Of Teni’s Show Didn’t Apply For Security – Rivers Police

Many people were left shocked this week when assailants recently killed two soldiers at an unknown location in Imo State, a policeman, two brothers and two others in Anambra State.

Although security agents often allege that those behind the senseless killings are members of the secessionist group, IPOB, and its security arm, Eastern Security Network (ESN), IPOB has always denied being responsible for the attacks.

“Everything #IPOB is accusing @HQNigerianArmy, @PoliceNG and #DSS of doing is verifiable. The epicenter of these crimes are Imo state, where @Govhopeuzodinma is governing. @StateDept @FCDOGovUK @EU_Commission @CanadianPM @LeahHardingAJE @JohnKingCNN, @GovNigeria is misleading you,” Kingsley wrote on his known Twitter handle.