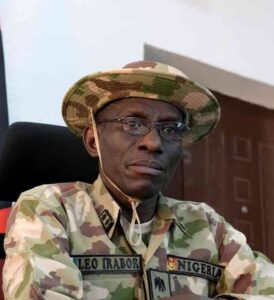 The Chief of Defense Staff (CDS), General Leo Irabor, has lamented the rising number of military personnel assisting and abetting terrorists and bandits in the country.

The commanders of various operations were also instructed by the general to sensitize their officers on the implications of collaborating with terrorists in a letter.

“Recent happenings in various TOOs reveal an increase in cases of aiding and abetting by personnel. This development was revealed in different reports of arrests of military personnel within a short period of time,” the letter signed on behalf of the CDS by one CE Oji read.

“It would be recalled that a soldier was arrested by a covert intelligence Team for conniving with a confirmed terrorists informant known as Babagana Kura in Bama LGA, Borno State.

“The arrests of these personnel are indicative of inside action that has continued to aid the adversary, pertinently with immediate or potential impact on operations.”

Jibrin, who had vanished from his post, was seen among the Boko Haram insurgents who had stormed Geidam town earlier.

The soldier was tracked by army intelligence and discovered in Gashua, hundreds of kilometres away from his service station, according to military authorities.