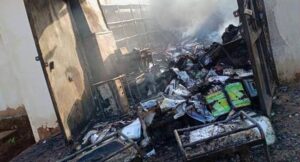 A late night fire incident has reportedly ravaged valuable materials and properties at the office of the Independent National Electoral Commission in Zamfara State.

Naija News learnt that the office of the electoral body located at the Kaura Namoda Local Government Area of the state gutted fire at about 9 pm on Monday (yesterday).

There was, however, no report of any casualty from the incident.

The PUNCH reports that officials of the state fire service responded to the incident immediately but could not put out the raging fire due to the lack of water in their firetruck.

INEC authorities in the region and the national level are yet to make an official statement about the happening at the time this report is given, Naija News reports.

Also, the Zamfara State Police Command is yet to confirm the incident.