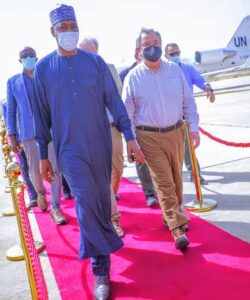 The United Nations Secretary-General Antonio Guterres has arrived Nigeria for a bilateral meeting with President Muhammadu Buhari’s administration, religious leaders and private sector to discuss impact of the Russia/Ukraine war.

The UN office in Nigeria announced his arrival in a tweet on Tuesday, adding that he will also travel to Maiduguri to see those displaced by terrorism.

“UN Secretary-General Antonio Guterres arrives Nigeria, meets with Borno State Governor, ProfZulum and IDPs in #Maiduguri. He will have an audience with @NGRPresident , Vice President, religious leaders, women, and the private sector representatives, among others,” the UN tweeted.

Before Guterres’ visit to Africa, he had travelled to Russia and Ukraine in a bid to convince both parties to stop the war which began on February 22.

Part of the reasons he presented before the Russia Minister of Foreign Affairs Sergei Lavrov was that African countries are witnessing unusual increase in prices in food and energy.

“We are interested in everything that can be done to minimize the impact ( of the war) in different parts of the world.

“I will be going to Africa after this visit, we are witnessing the dramatic impacts of the war in the situations that we have in countries that already face the covid, that face the uneven access to resources after the covid in very unfair way that international financial system works and now with the increase of prices. I have a deep interest to end the war,” he had said.

Nigeria is the third country he is visiting after Niger Republic and Senegal.

YOU MAY ALSO LIKE:   See What Happened To Buhari’s Minister Who Slumped At Bauchi Event
Russia/Ukraine War : UN Secretary-General Arrives Nigeria For Talks 2022-05-03
Oluwasegun Adesuyi
Share