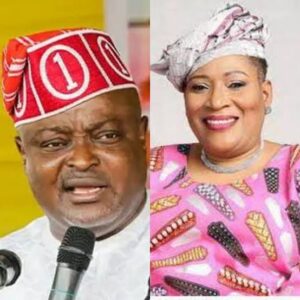 With the passing of Chief Kemi Nelson, a member of the Governor’s Advisory Council (GAC), Lagos State has lost a very bright light, the Speaker of the Lagos State House of Assembly, Rt. Hon. Mudashiru Obasa, has said.

Chief Nelson, a former South-West Women Leader of the All Progressives Congress (APC), died on Sunday at the age of 66 after a brief illness.

Dr. Obasa, in a statement on Monday by his Chief Press Secretary, Eromosele Ebhomele, described the death of the politician as a huge loss to Lagos state, the party she served with so much passion and enthusiasm, members of the party and Nigeria.

“The shock is indescribable. It is so huge and painful, one that will be difficult to heal for a long time. Indeed, we lost a very bright light that had always brought the desired radiance to our party.

“Chief Kemi Nelson was a coordinator of women and she carried out her tasks with so much ease, enthusiasm and effectiveness to the admiration of everyone of us.

“She never hid her passion for a better Lagos and Nigeria through democratic governance. She was dilligent and excelled in every position or committee she found herself.

“While I, like many others she held in high esteem, will personally miss her, I pray that God would strengthen every member of her family, her friends, associates, those she mentored, the GAC and our party,” Obasa prayed.

Chief Kemi Nelson, former Executive Director of Nigeria Social Insurance Trust Fund (NSITF) and influential politician, was a senatorial candidate in 1992. She lost the election to Asiwaju Bola Tinubu, now presidential candidate of the APC ahead of the 2023 election.

YOU MAY ALSO LIKE:   If Buhari can’t secure Aso Villa, his capacity to secure Nigeria is in doubt —PDP

In 1999, she pitched tents with the Alliance for Democracy (AD) and served in the administration of Asiwaju Tinubu as Commissioner for Women Affairs and Poverty Alleviation.