My Heart Cries For Nigeria Says Prophet Joshua Iginla As He Speaks On Tinubu’s Choice Of Shettima As Running Mate, kuje Prison ( Video)

My Heart Cries For Nigeria Says Prophet Joshua Iginla As He Speaks On Tinubu’s Choice Of Shettima As Running Mate, kuje Prison ( Video) 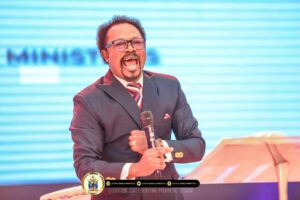 The General Overseer of the Champions Royal Assembly, Prophet Joshua Iginla has taken shared his view on the trending Muslim-Muslim APC ticket after Chief Bola Tinubu opted for the former Governor of Borno State, Kashim Shettima, as his running mate for the 2023 presidency. The prophet also went further to plead with Nigerian leaders to fix the country.

According to Prophet Joshua Iginla, he wondered why APC would be so insensitive by going for a muslim-Muslim ticket. “I asked myself, in a country like Nigeria with too much strong religious beliefs, why will the ruling party go for a Muslim-Muslim ticket? Why will their presidential candidate, Bola Tinubu, go with that view? I asked myself again, if we don’t know, we are sounding the drum of war in a place where there is unity, peace and understanding despite our differences. Nigeria is a country for all and does not belong to a particular set of religion. It has never happened before in this country. Why now?

YOU MAY ALSO LIKE:   Primate Ayodele Pays Prophet Joshua Iginla A Condolence Visit In Abuja

“If we must make Nigeria great, we must allow equity, justice and sensitivity to be the watch of the day for our leaders. I am pleading in my heart, this was not the Nigeria I was born to. This was not the Nigeria that our great heroes fought for. What is going on? Our leaders, please save us because the Muslim-Muslim ticket is a sign of war”.

Meanwhile, the prophet also touched the issue of insecurity when he commented on Kuje prison break. He said the Nigerian military is among the best in Africa but wonder why the country could not replicate that standard in her nation. He further said the security bodies should wake up.

Speaking on Kuje Prison attack and a message to Nigerian leaders, the prophet said, “Kuje prison break is the one that left me speechless. Why? It happened in a country with the highest ranking military capacities in Africa. Sometimes I ask, is it not the same military that fought wars in Africa and came out victorious? The Giant of Africa has now become the sleeping brother of Africa. In the history of this country, we have never experienced such a thing before.

“It is because of insensitivity of our leaders that insecurity increased in this nation. If they are conscious of things to happen, they will take a step to remedy the issue. In Nigeria, before anything happens, the signs are clear if only our leaders can be more sensitive to detect them on time.

“Finally, this is my message to our leaders. I am sorry to say this, many of our elected leaders don’t feel the pains of the masses. Please in the name of whatever you hold dear, fix this county. This was not the Nigeria my parents told me about”.

Prophet Joshua Iginla started by saying, “As a pastor, my phone rings everyday. What are they asking for? They are looking for food to eat. Today, a Dollar is about N600. Today, our diesel is up to N800 per litre. Today, there is insecurity everywhere that many are gradually moving to arming themselves. We are afraid to be in church; we have become the security of ourselves after the Owo massacre. If the church can be attacked, no one is safe again”.

YOU MAY ALSO LIKE:   How I Got The Fund To Build Our Multi-Billion Naira 80,000 Capacity Church – Prophet Joshua Iginla Reveals