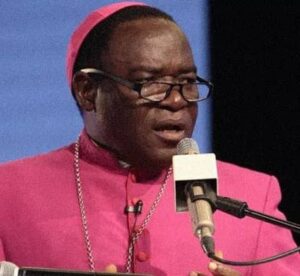 The Bishop of the Sokoto Diocese, Rev. Fr Matthew Kukah, has reacted after the presidential candidate of the All Progressives Congress (APC), Bola Tinubu picked Kashim Shettima as his running mate.

Tinubu had on Sunday confirmed the selection of the former Governor of Borno as his running mate during an interview with journalists after a closed-door meeting with President Muhammadu Buhari in Daura, Katsina State.

Naija News understands that the announcement was received with a barrage of reactions as Tinubu chose to go with a Muslim-Muslim ticket despite several admonitions by concerned bodies to consider a Muslim-Christian ticket.

Prior to the development, the Christian Association of Nigeria (CAN) had vehemently rejected the idea of a single-faith-ticket, urging political parties to focus more on competence than sentiment.

YOU MAY ALSO LIKE:   2023: We Won’t Keep Quiet, Nigeria’s Next President Must Come From The South– Umahi

Tinubu, who ended with a Muslim-Muslim ticket has, however, defended his reasons for not picking a Christian as his running mate.

Speaking on the development in an interview with The Punch, Kukah stated that Tinubu chose Shettima because he thinks the lawmaker will give him a fair chance in the 2023 presidential election.

Kukah asserted that he is not worried over the choice of the former Borno Governor as the vice presidential candidate of the ruling party, adding that Tinubu was free to pick whoever he wanted.

He stated that it was up to Nigerians to decide if they want a Muslim-Muslim President and Vice-President or not.

YOU MAY ALSO LIKE:   Ghana’s Inspector General Of Police Advises Prison Inmates To Watch Emmanuel Tv

He said, “This is what you call team selection and everybody will choose depending on what they think will give them a fair chance. So people will take responsibility for the choices they have made. For me, it is not something to lose sleep over.

“If people feel unhappy with the kind of choices that have been made, that is why we are democrats, you can’t force it. We outsiders cannot force a choice of any candidate. It is now left for you to look at the choices that have been made. And there is no guarantee that all Christians will vote for Christians and all Muslims will vote for Muslims.”