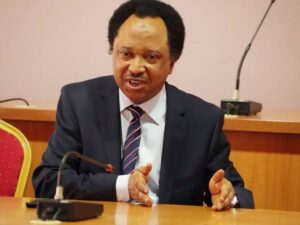 Former Kaduna Central Senator, Shehu Sani has reacted to the findings and conclusion of the Lagos State judicial panel on police brutality cases and the shooting of protesters at Lekki toll gate.

Sanwo-Olu had stated, after receiving the report, that it will be submitted to the National Economic Council (NEC), chaired by Vice President Yemi Osinbajo.

Naija News understands that the Lagos #EndSARS panel in its reports indicted the Nigeria Police Force in the October 20, 2020 incidents that caused a commotion in the country.

In the report titled, ‘Report Of Lekki Incident Investigation of 20th October 2020’, the panel claimed that the police officers who were at the tollgate physically assault unarmed protesters.

The panel’s report added that the assault of Nigerian youths at the Lekki toll gate led to injuries and deaths.

The panel also accused the police of attempted cover-up of the shooting of protesters at Lekki tollgate by picking up bullets at the scene of the incident.

Reacting to the outcome of the panel that has received commendations from citizens, Shehu Sani in a post on his Twitter account, said those that have been in denial of the Lekki massacre can now bury their shame.

He said they should accept the fact that they tried all possible means to cover up the truth of the incidents.

The former lawmaker tweeted: “The doubters and deniers of the #LekkiMassacre should simply and humbly step out of their bubble of falsehood and accept the fact that they attempted to cover up corpses with Roses.”

YOU MAY ALSO LIKE:   2023: PDP Reacts As Jonathan Meets Campaign Coordinators

Sani wrote in another post: “It’s like People are holding Cutlasses and sticks and looking for those who denied Lekki Massacre”