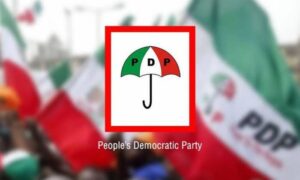 The Peoples Democratic Party (PDP) has been evicted from the property which houses the party’s secretariat in Lagos State over unpaid rent.

It was learnt that the landlord of the property located at 56A Adekunle Fajuyi Road, GRA, Lagos claimed the party is owning rent running into several millions of naira.

However, in its immediate reaction, the Lagos PDP has described the development as sad and a grand plan to embarrass them.

The party in a statement through its state publicity secretary, Taofik Gani claimed they just recently paid N8m with an agreement to settle the balance soon.

The statement added that they are unaware of the court process ordering their eviction, and vowed to take up the matter legally saying its all part of attempts to destabilize the PDP in Lagos.

He said, “To the best of my knowledge, I know there were demands for outstanding rent and infact some payments made with balance to be paid soonest, but not aware of any court process to evict at all.

“This must not be a ‘kangaroo’ process aided to embarrass and destabilize the main opposition in the state.

“All sensitive documents of the party must have been destroyed or deliberately taken away to break our strategies towards 2023. This is Vendetta.

“We shall put in all legal efforts to get justice.”

YOU MAY ALSO LIKE:   FrieslandCampina Celebrates 150 Years of Grass-to-Glass Dairy Cooperative

Umeh said the people of Anambra State have openly chosen the leader they want based on the outcome of the November 6 election which produced Charles Soludo of APGA.

The APGA chieftain further chided Umeh over his threat to challenge the election result in court by telling the APC candidate that ‘Anambra is not Imo’ where a candidate who came fourth at the polls eventually became the State Governor through a court order.

YOU MAY ALSO LIKE:   When THEY choose to raise false Alarm for selfish Gains - Muheeba Dankaka

He mocked Uba, reminding him that he didn’t win any of the 21 local government areas in the state, hence his claim of a ‘stolen’ mandate is not sensible.