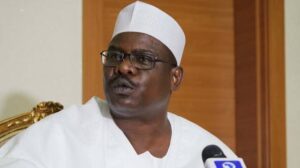 Society gazette reports that Senator Ali Ndume made a grammatical mistake during an interview with Channels Television.

The political leader was briefing journalists when he mistook tunnel for ‘toilet’ and immediately felt remorse over the erroneous inclusion.

“we’re expecting light at the end of the toilet” he said.

YOU MAY ALSO LIKE:   Be Responsible For Your Own Safety – Nigerian Govt Advise Citizens In Ukraine
'Light At The End Of The Toilet' - Senator Ali Ndume Commits Blunder (Video) 2021-07-13
Oluwasegun Adesuyi
Share