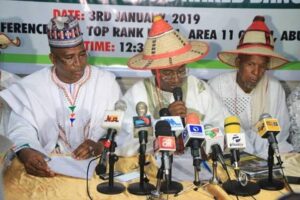 A faction of Fulani herdsmen in Nigeria known popularly as Miyetti Allah Kautal Hore, has alleged that actions of wanted Yoruba Nation agitator and activist, Sunday Adeyemo, better known as Sunday Igboho are political.
The group in a statement on Monday by it’s spokesperson, Saleh Alhassan, stated that all Southwest governors know Sunday Igboho’s whereabouts and are hiding him.

Society gazette understands that Alhassan stated this in an exclusive interview with The PUNCH.

Donald Ojogo, an aide to the Chairman of South-West Governors’ Forum and Governor of Ondo State, Rotimi Akeredolu, has though countered this claim, saying it is demeaning for the governors to respond to Miyetti Allah’s accusation.

Recall that the Department of State Services on July 1, 2021, invaded Igboho’s Ibadan residence in Oyo State where they killed two of his aides, arrested and detained 13 others following a gun battle.

Igboho, a spearhead of the separatist agitation for the Yoruba nation, escaped the bloody raid and was subsequently declared wanted by the secret police on allegations of stockpiling arms to destabilise the country, which he has since denied.

Igboho whereabout has, however, remain unknown since the incident.

The Yoruba nation agitator had gained popularity in January, following his eviction notice to suspected killer herders in the Ibarapa area of Oyo State, had since been unknown.

Speaking with The PUNCH on Monday, the Miyetti Allah Kautal Hore spokesman said the DSS should have raided Igboho’s house earlier than it did.

Alhassan implored Sunday Igboho to turn himself in to security operatives because he would be forcefully apprehended.

He said, “It is in his (Igboho) own best interest if he submits himself peacefully so that he can face justice. Why is he running? Is he not a revolutionary? He should submit himself before they get him because as it is now, he has been declared wanted, he should present himself to the nearest police station.”

YOU MAY ALSO LIKE:   PDP governors defecting to APC are afraid of EFCC, says Ortom

He said added that “All his (Igboho’s) actions are political; he is being used. His godfathers in the South-West should bring him out.

“The (Nigerian) State has declared him wanted. He is not more than the state. The governors keeping him should produce him.”

YOU MAY ALSO LIKE:   Heirs Holdings Significantly Expands Oil and Gas Portfolio

“He declared a republic; that was a rebellion. How can you be threatening the sovereignty of the (Nigerian) State and you still have the guts to be walking around and be organising rallies?” Alhassan queried.