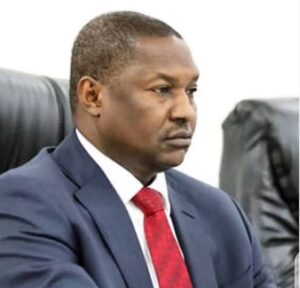 Khe Attorney-General of the Federation and Minister of Justice, Abubakar Malami, on Thursday, reacted to the process to extradite the former head of the IGP Intelligence Response Team, Abba Kyari to the US.
Naija News had earlier reported that Malami filed an application before the Chief Judge of the Federal High Court in Abuja for Kyari’s extradition.

The application marked: FHC/ABJ/CS/249/2022 was filed under the Extradition Act.

YOU MAY ALSO LIKE:   Sacked Winners Pastor Gets Compensated, Receives Better Salary

Malami noted that the application was filed before the court following a request by the Diplomatic Representative of the U.S. Embassy in Abuja.

The extradition request of the suspended deputy commissioner of police is connected to his indictment in the $1.1million fraud perpetrated by confessed internet fraudster, Abass Ramon, popularly known as Hushpuppi and four others.

The minister on Thursday while speaking through his media aide, Isa Gwandu said, after “thorough studies and reviews of issues regarding the application and components thereof, processed the application and forwarded same to the relevant authorities for further necessary action.

“As you are aware extradition is a process that involves multifaceted components.

“The components are usually multi-territorial, international, local and judicial. Submission of request from the concerned party to the relevant authorities constitutes one of such components.

The Office of the Attorney General of the Federation and Minister of Justice received the extradition request in respect of the officer in question.”

Kyari is currently being detained by the National Drug Law Enforcement Agency over an allegation linking him to drug trafficking.

YOU MAY ALSO LIKE:   No Plans To Restore Back Disbanded SARS – IGP Debunks Trending Report

The embattled police officer was arrested by the Nigeria police force alongside four others and handed over to NDLEA.