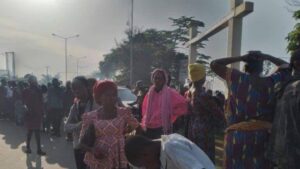 Over 20 people are feared dead just before the commencement of a programme organised by a new generation church in Port Harcourt, the Rivers State capital.

Though, the church known as ‘Kings Assembly’ is located in the GRA axis of the state capital, the programme was at the Polo Club in the to accomodate the usual large congregation

A witness stated that the incident occurred during the church’s gift and food items distribution to celebrate its fourth anniversary.

According to the source, people arrived since Friday while others arrived as early as 6.30am this morning for an event that was supposed to start by 9am.

He said some persons who were supposed to have a sports session arrived at about 8am and opened the small gate which gave the surging crowd an opportunity to force their way in, resulting in the stampede.

“The incident happened this morning. The church invited people for it’s fourth edition of food and gift items distribution. Some came since Friday while many others came as early as 6.30am on Saturday.

He said many victims had been taken to an undisclosed hospital in Port Harcourt.

The acting spokesperson of the state Police Command, Grace Iringe-Koko, confirmed the incident to newsmen, but could not give a figure just yet.

“I am doing a press statement on the incident. It would be released soon,” she stated.

Previous Yellow turtle predicted who will win the Champions League
Next Bandits Gun Down Groom, Abduct Pregnant Bride In Kaduna