Yellow turtle predicted who will win the Champions League 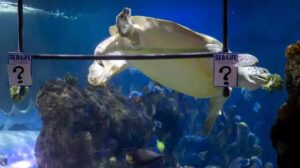 Yellow, a thirty year old turtle that fifteen years ago arrived at the Sea Life Aquarium in Benalmádena (Málaga) from the Cayman Islands, has predicted that Liverpool will win the Champions League final against Real Madrid today in Paris.

The keepers of this animal have prepared two containers about two meters apart with a broccoli leaf in each one – which represented the rivals in this final – and, when it was lowered into the pond where the turtle was, it went to its left side, where there was the image of the English team.

YOU MAY ALSO LIKE:   Shocking! Kidnappers Of 121 Kaduna Students Threaten To Collect Interest Over Delayed 80M Ransom Payment

Paul the octopus
The turtle aspires to become the best student of other visionary animals, such as Paul the octopus, who rose to fame in 2010 after correctly predicting eight matches of the 2010 World Cup, including Spain’s victory over the Netherlands in the Final played in Johannesburg (South Africa) on July 11.

The marketing director of Sea Life Benalmádena, María Morondo, pointed out that Yellow, who weighs more than 100 kilos, is “the star of the Jurassic tunnel” and many visitors ask about him, although she hopes that on this occasion the animal is wrong so that the Spanish team led by Carlo Ancelotti wins.

The choice of Yellow, who has prowled for several minutes both broccoli leaves without opting for any of them in a clear sign that it will be a hotly contested final, has left the aquarium workers upset, who expected the turtle to choose the food with the image of Real Madrid.

Liverpool goes for revenge
Real Madrid and Liverpool meet again in the Champions League Final, as happened in 2018, when the Spanish team defeated the English side 3-1 with two goals from Gareth Bale and one from Karim Benzema, while Liverpool’s goal was scored by Sadio Mané.

Tags Yellow turtle predicted who will win the Champions League