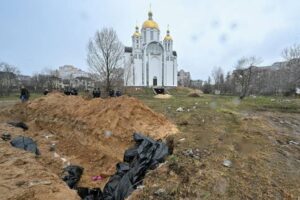 The Governments of the United Kingdom and France on Monday said they are not happy with footage of mass graves in Bucha, Ukraine, days after the Russian military forces withdrew from the area to another part of the country.

The First Deputy Minister of Foreign Affairs of Ukraine, Emine Dzheppar, tweeted photos of “people deliberately killed by Russian occupants” in Bucha but the Russian Defence Ministry denied the development describing it as a “hoax”.

The defense ministry stated that all Russian Units withdrew completely from Bucha by March 30 while the photos were circulated from April 4.

It added: “During the time that the town has been under the control of the Russian armed forces, not a single local resident has suffered from any violent action.

“The so-called evidence of crimes in Bucha did not emerge until the fourth day, when the security service of Ukraine and Representatives of Ukrainian media arrived in the town. “

But UK prime minister, Boris Johnson refused to agree with the Russia side.

“The discovery of more mass graves outside Kyiv is sickening. The UK will not stand by whilst this indiscriminate and unforgivable slaughter takes place.
“We are working to ensure those responsible are held to account. We will not rest until justice is done,” Johnson tweeted on Monday.

On its part, the France government said Russian government must answer for “these crimes”.

YOU MAY ALSO LIKE:   Press Release: Defence HQ Reel Out Achievements of Nigeria’s Military

“The images coming from Bucha are unbearable. In the streets, hundreds of civilians were cowardly murdered. We express our sympathy for the victims, our solidarity with the Ukrainians,” the France government tweeted on Monday.

Meanwhile, the Russian government has requested for a United Nation Security Council meeting today so as to defend itself on the recent development around Bucha.

YOU MAY ALSO LIKE:   Boko Haram: COAS Cries Out To Senate Over Reduction Of Nigerian Army Budget By Ministry Of Finance
France Call For Action Against ‘Cowardly’ Russia Mass Graves In Ukraine: UK 2022-04-04
Oluwasegun Adesuyi
Share

Previous WeMA BANK announces 108.3% growth in Profit Before Tax
Next JUST IN: One Dead As Hausa Motorcyclists, Area Boys Clash In Ipaja