JUST IN: One Dead As Hausa Motorcyclists, Area Boys Clash In Ipaja 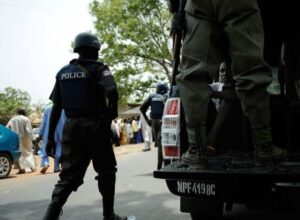 Tthere was some pandemonium earlier today at the Gate Bus stop, Ipaja which left one person dead.

It was, however reported that Operative of the Lagos Rapid Response Squad (RRS) has arrested the killer of a person who died in the violence and other suspects.

Also restored has been normalcy in the area, while intensive patrols are ongoing.

“More over Hausa people over 50 was arrested by police with their okada. Next updating still coming. REST IN PERFECT PEACE MY BOY,” @Ola Federal, a Twitter user said.

Tags Area Boys Clash In Ipaja JUST IN: One Dead As Hausa Motorcyclists