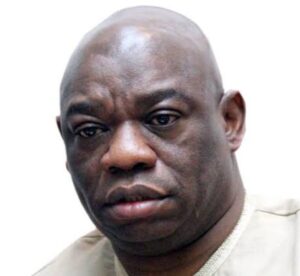 Late Abiola popularly known as MKO Abiola was the winner of June 12, 1993 presidential election believed to be the fairest election in Nigeria’s history.

Kola Abiola was on Thursday received into the party by the National Chairman of the PRP, Falalu Bello, who described him as an asset to the party.

The new entrant said the PRP is a party that was started by the people and which is truly for the people. He hailed the party for it’s commitment to internal democracy.

Kola Abiola said, “Today makes my formal inroad after 27 years, back into politics.

“I particularly picked to come back into politics through the PRP for some good reasons.

“I have gone back to the history of Nigeria to look at the party that truly represents Nigeria.

“I have gone back and I have found out that the oldest living party is the PRP; it still holds those ideals of what Nigeria and democratic practice should be like.”

YOU MAY ALSO LIKE:   WINNERS!Liverpool clinch record ninth Carabao Cup at Wembley

He said he believes in equal opportunities for all Nigerians in every aspect and stressed that the PRP believes in that as well.

He said the youths would be given opportunities to take their rightful places in the party and the country to reposition it for development.

“I have come back to PRP to show Nigerians that not too long ago, we did things in the right way and the new entities that have come together nowadays forget that there was Nigeria that did things right.

“I am one that believes in an equal opportunity be it employment, be it business, equally in politics and I believe this party represents all of these.

“Everybody should have equal opportunity, irrespective of age, religion and ethnicity and that is represented here,” Mr kola Abiola said.

“We have a youth population that has been caught out of the system, the political process.

YOU MAY ALSO LIKE:   Go and Rest, Allow Your ‘Children’ Take Over The Mantle Of Leadership – Yahaya Bello Tells Bola Tinubu

“The first thing I want to do is to disrupt the political process, to disabuse the minds of the youth about godfatherism.

“The way to do this is to give the true owners of Nigeria, that is, the 18 to 36 years age group that makes up over 75 per cent of the population, an opportunity for their voices to be heard and their numbers to count.”