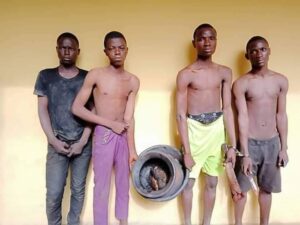 The four teenagers, who allegedly killed a 20-year-old girl identified as Sofiat Kehinde, have been ordered by an Abeokuta Magistrates Court sitting in Isabo, Ogun State to be remanded in prison for two months.

The suspects, Balogun Mustaqeem, 20; Majekodunmi Soliudeen,18; Abdulgafar Lukman,19; and Waris Oladeinde,18; were arraigned on Thursday on two counts of conspiracy and murder.

Recall that the teenagers were apprehended in the early hours of last Saturday burning the head of Sofiat in a local pot for ritual.

Inspector Lawrence Balogun, police prosecutor, while speaking in the court noted that the defendants committed the offence around 11pm on January 28 at the Kugba area in Abeokuta.

He further stated that the suspects conspired among themselves to kill Sofiat, who was Soliudeen’s girlfriend.

The prosecutor added that the defendants murdered the girl by cutting off her head with a cutlass, adding that they had plans to use her for money rituals.

According to Balogun, the offence contravened sections 324 and 316 of the Criminal Code Laws of Ogun State 2006.

He said, “They unlawfully killed Sofiat Kehinde, aged 20, by cutting off her head, thereby committing an offence contrary to and punishable Section 319 of the Criminal Code Laws of Ogun State, 2006.”

YOU MAY ALSO LIKE:   "My Vision is a Nigeria that will Always have my Back"- Dr Abdulfattah Durojaiye

The Magistrate, I. O Abudu, who did not take the plea of the defendants, ordered that they be remanded in prison.

Abudu ordered that the defendants be remanded in the Oba Custodial Centre pending legal advice from the Ogun State Directorate of Public Prosecutions.

She, however, adjourned the case till March 14 for mention.