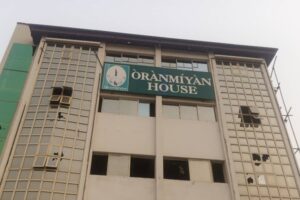 The All Progressives Congress faction loyal to the Minister of Interior, Rauf Aregbesola, has blamed Governor Gboyega Oyetola for the attack carried out by some gun-toting men on the old campaign office of the minister.

The attacked which happened on Thursday evening has triggered a fresh allegation and counter allegation between the two factions of the APC in Osun State.

The chairman of Aregbesola’s faction of APC in the state, Rasaq Salinsile, in a statement on the attack said the Thursday attack was the climax of the numerous attacks on those of them opposed to the style of governance of the incumbent governor.

But in a swift response to the allegation, the state government dissociated itself from any involvement in the attack.

Salinsile, in his statement, declared that the state was fast descending into anarchy under the watch of Oyetola.

The statement read in parts, “The Thursday attack climaxed a litany of others on members of the APC who are opposed to the style of governance and party administration of Governor Gboyega Oyetola in the state.

“On the 18th of November last year, a similar attack was carried out in the daylight when gunmen shot into the crowd of members at the same Oranmiyan House. Till date, nothing has been heard of that incident.

“Just on Tuesday, thugs were sent after party members in Ikirun during a Federal Constituency meeting. The police, rather than arrest the thugs that unleashed mayhem on elderly women and men, went from house to house of our leaders and members to arrest them in a midnight raid.

“They were on Wednesday sent to Ilesa correctional centre. At this stage, all we can do is to alert the whole world to the fast descent into anarchy under the watch of Governor Oyetola and in particular, the devilish plot to mow down APC leaders and members who refuse to go along with him on his misadventure.

“We call on the security agencies to, as a matter of urgency, be alive to their duties before more havoc are wreaked by the desperation of the governor.”

However, the state government has also condemned the attack on the Oranmiyan House which housed Aregbesola Campaign Office in 2007.

The Commissioner for Information and Civic Orientation, Funke Egbemode, in a statement called on the police to fish out the hoodlums who carried out the attack.

The commissioner also strongly dissociated the state government from any involvement in the attack, saying that it was wicked for anyone to attribute such mischief to a government that had invested heavily in the peace of the state.

Egbemode said, “The accusation that the government of Mr Adegboyega Oyetola had anything to do with Thursday’s attack on the Oranmiyan House is sad and laughable. It defies reasoning that a man who has invested so much in the peace of Osun in the last three years will descend that low.

“This government is united, it has all its ducks in a row. The Party is also united and its status and activities have been ratified by the national secretariat. There are no reasons to join issues with anyone, let alone engaging in violent act.

“Those who are grabbing at straws to stay afloat, especially because their rebels’ den has fallen like a pack of cards, should try to fix their fortunes instead of blaming everybody, but themselves, for what has happened to them,” the statement partly reads.”