Music a universal language and one artiste that is speaking it in clear terms to the listening joy of his fast growing fans and Nigerians at large is Damian Wan also known as Afro Casano. His recent effort titled “Table Turn” is a fusion of good melody and morally sound lyrics. The singer is a golden ray of hope in the gloomy dark cloud of Nigerian morally deficient music industry and it is a matter of time before the ray turn to a full blown sun pouring on the ever increasing thirst of youths across the world. Damian whose songs are usually not just great melody but also songs that will stand its ground amongst the people for impactful meaning recently dropped a new song that has been enjoying massive airplay across Nigeria, the song which featured one of Nigerian music genius in the person of “Musical Taliban” Oritsefemi. The song comes handy during this period as it is song to pray for better time for everybody and the country especially during this trying period. 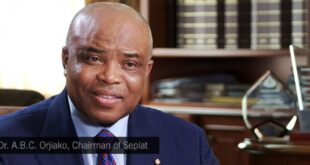 When will Seplat Chairman, ABC Orjiakor Pay His Debt?

In life, there is a time for everything, a time to sow and a time ...