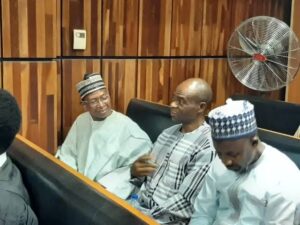 The Federal Capital Territory High Court sitting in Abuja , on Thursday, admitted the Accountant General of the Federation, Ahmed Idris and others to bail on several terms and conditions including not leaving the FCT till the end of the case.

On Wednesday, the AGF’s lawyer, Chief Chris Uche SAN, had sought for an order of court granting bail to the first defendant (Idris) applicant pending his trial.

The Economic an Financial Crimes Commission had on July 22 arraigned Idris, Godfrey Olusegun Akindele, Mohammed Kudu Usman and Gezawa Commodity Market and Exchange Limited before the court, on 14 count charges bordering on gratification, stealing and criminal breach of trust to the tune of N109,485,572,691.

But they had pleaded not guilty to the charges.

The other defendants also asked for bail.

But the Economic and Financial Crimes Commission on Wednesday urged the Federal Capital Territory High Court, Abuja to refuse bail for Idris and others, citing the gravity of their charges against them.

But Justice Adeyemi Ajayi held that the allegations against the defendants were yet to be proven and as such, they are still entitled to bail.

She also said that the EFCC did not prove that they disobeyed any conditions when it gave them administrative bail.

YOU MAY ALSO LIKE:   Drama As Zulum Storms Borno Community, Conducts Impromptu Test For Teachers

“I am persuaded that there is no other way to go than to follow the rules of law in this process,” she said.

“I hereby admit the defendants to bail,” she said.

She added that the EFCC administrative terms and conditions earlier imposed them continues.

One of the EFCC terms was that they deposit their passports in its custody.

YOU MAY ALSO LIKE:   Nigerians Propel Chelsea to Comfortable wins over Wolves

The judge added that they shall not procure alternate passport until the case case is dispensed.

“In addition the defendants shall not leave the jurisdiction of the court and shall remain in Abuja.

“Should they want to leave, they must apply to the court for consent,” she ruled adding that the defendants be remanded at the Kuje Prison until they perfect their bail terms.

Previous President Buhari not aware of threat to kidnap him until I told him – El-rufai
Next JUST IN: Documentary On Terrorists: FG Threatens To Punish BBC