JUST IN: Documentary On Terrorists: FG Threatens To Punish BBC 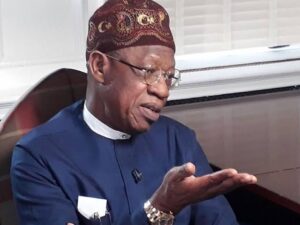 Following its documentary on how terrorists hold sway in some parts of the country, the federal government has said it will punish the British Broadcasting Corporation (BBC).

The Minister of Information and Culture, Lai Mohammad, gave the hint in Abuja on Thursday even as the National Security Council meeting is underway.
THE WHISTLER had reported that the 50-minute long BBC documentary titled ‘The Bandit warlords of Zamfara’, was undertaken by Yusuf Anka, a journalist who crisscrossed remote bandit enclaves in the state.

YOU MAY ALSO LIKE:   2023 Presidency:  No commitment yet from president buhari, Apc leaders hints Jonathan

It featured Abu Sanni, a self-confessed bandit kingpin, who showed the station around, pointing out that insecurity has become a business everyone benefits from.
Sanni confessed that he helped mastermind the abduction of students of Government Girls Secondary School Jangebe, Zamfara in an interview by the BBC Africa Eye in a forest in Zamfara.

Angered by the documentary in the face of increasing terrorist attacks even in Abuja, the minister said, “Let me assure you, they will not get away with this naked glorification of terrorism and banditry in Nigeria.”

He lamented that, “When otherwise reputable platforms like BBC give their platform to terrorists, showing their faces as if they’re Nollywood stars… I want to assure them that they won’t get away with it, the appropriate sanctions will be meted.”