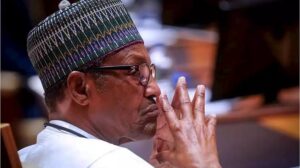 The National Association of Nigeria Students has said it will mobilise its members in the South-West in protest against the refusal of President Muhammadu Buhari to sign the 2010 Electoral Act (Amendments) Bill 2021 into law.

The Coordinator of the NANS South-West (Zone D) Emmanuel Adegboye said this at a press conference in Ibadan on Wednesday.

The zone’s Public Relations Officer, Opeoluwa Awoyinfa and Chairman of NANS in Oyo State, Quadri Adeleke, were present at the briefing where the students association also frowned on the failure of the Senate to override the President’s veto.

The NANS coordinator said Nigerians’ right to elect political leaders coukd not be said to have been protected if the only thing they could do is to only choose between candidates that were made flag bearers of respective political parties by few men regarded as delegates.

Adegboye said, ‘ The Presidency in same manner argued that the monetisation of the political system would further be entrenched as buying of votes during party primary elections will be encouraged.

Rather than laments, the Presidency should admit that its government has failed to change the economic condition of the Nigerians positively.

” Rather than curtailling the political progress entails in the Electoral Act 2010 (Amendment) Bill because of this, the Presidency should rather address the economy which has made the people susceptible to selling of their votes. This, we consider as a reasonable action for a serious government.

YOU MAY ALSO LIKE:   Atiku Blames Buhari as He sells His Shares in Intels

“Basically, all other excuses given by the Presidency in the letter addressed to the National Assembly are not tenable and considered inconsequential. Rather than consenting to the institutional inadequacies of these political parties, the Presidency should rather encourage all registered political parties to go and define their party program well and build trust within their rank and file.

“We have credible information that some few principal members of the National Assembly have been offered bribes at the detriment of the Nigerian masses to dance to the tune of some cabals in the Presidency.

NANS, as an independent body for all students in Nigeria, will not fold its arms and allow this double-dealing scale the hurdles of the legislature.

YOU MAY ALSO LIKE:   Food security is critical as it enhances national security – Ecobank MD

” We will mobilise our members to ensure that what is supposed to be an enduring legacy of this administration is not truncated based on the interest of very few dishonest persons.

“By using your veto power to override Mr. President’s failure to sign this Bil, Nigerians and indeed posterity will never forget you all as distinguished members of the National Assembly.”