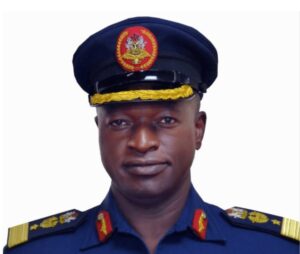 The National Association of Online Security Reporters, NAOSRE, an association made up of the finest hands in Nigeria’s security reportage, heartily congratulates Ibikunle Daramola, Nigerian Air Force, NAF Spokesperson, on his well deserved promotion from the rank of Commodore to Air Vice Marshall.

The promotion was announced on 26 November 2020, as approved by the Air Force Council,AFC.

In a statement signed by NAOSRE President, Mr. Oyewale Femi, the security media association stated that it is particularly delighted about the promotion of Commodore Ibikunle Daramola to the rank of Air Vice Marshall as a result of his professionalism in managing the image of Nigerian Airforce.

“NAOSRE is elated over the promotion of Commodore Ibikunle Daramola to the rank of Air Vice Marshall. He is one officer who has been diligent on his job as Air Force image maker. We look forward to working with him in the years ahead for safer Nigeria,” Oyewale stated.

Oyewale however added that “It is NAOSRE’s hope that this elevation will spurn Ibikunle Daramola into more commitment in offering greater service to Nigeria at this trying period,” he advised.

Air Vice Marshall Daramola was the Commander, 041 Communications Depot, Shasha, Lagos, before he became the Nigerian AirForce spokesman in 2018.

He is a member of the Nigerian Defence Academy (NDA) Regular Course 39 and was commissioned into the NAF as a Regular Combatant officer in September 1991.