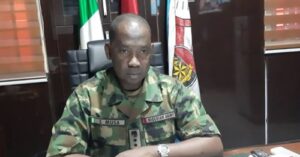 The Chief of Army Staff, Lieutenant Tukur Buratai has congratulated newly promoted Nigerian Army Spokesman, Sagir Musa, who was among the officers promoted from Colonel to Brigadier General on Wednesday.

In a statement signed by the Army spokesman, now Brigadier General Sagir Musa,that the Army Council, on Wednesday the 25th of November 2020, approved the promotion of senior officers to the next ranks of Major General and Brigadier General respectively.

YOU MAY ALSO LIKE:   Oshiomhole Has Always Campaigned in Poetry By Abiodun Adekunle

Sagir Musa who hails from Katsina State was until the appointment acting Director of Army Public Relations was the spokesman of 82 Division, Enugu.

He replaced Brigadier General Sani Usman, who voluntarily retired from the service