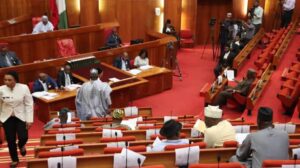 The National Assembly on Tuesday voted against the provision of special seats for women in the legislature.
Members of the two chambers rejected the provision during voting on clause 68 being considered in the ongoing constitutional amendment.

The proposed Bill on VAT reads: “A Bill for an Act to Alter Part I of the Second Schedule to the Constitution of the Federal Republic of Nigeria, 1999 to include Value Added Tax on the Exclusive Legislative List; and for Related Matters”.

Naija News reports that both the Senate and the House of Representatives moved against moving Value Added Tax (VAT) to exclusive legislative list.

YOU MAY ALSO LIKE:   BELLO INSTALLED AS THE 41ST ROTARY DISTRICT 9110 GOVERNOR, CALLS FOR SERVICE TO CHANGE LIVES.

The Bill on Special seats for women reads: “A Bill for an Act to Alter the Provisions of the Constitution of the Federal Republic of Nigeria, 1999 to Provide for Special Seat for Women in the National and State Houses of Assembly; and for Related Matters”.

41 Senators voted in favour of the proposed amendment, while 44 voted against, failing to meet the required two-third (73) membership.

YOU MAY ALSO LIKE:   FIRSTBANK PRESENTS DEVICES TO LAGOS STATE TOWARDS DRIVING 1MILLION STUDENTS TO E-LEARNING

Like the green chamber, the red chamber also voted against creating special legislative seats for women in the National and State assemblies.

The proposed amendment suffered set back after 30 senators voted in favour, while 58 voted against.

YOU MAY ALSO LIKE:   Gunmen Strike Again In Plateau State, Kill 5, Abduct Four Others in Fresh Attack

For the House of Representatives, it is two additional seats for each state and the FCT that is to be reserved for women without prejudice to their eligibility to contest for the other seats.

And finally for the Houses of Assembly of each state one additional seat from each of the three Senatorial District is reserved solely for women.

Also, a proposal to include at least 35 women in political party administration also failed to scale through.

34 senators voted in favour of the provision while 53 voted against it.