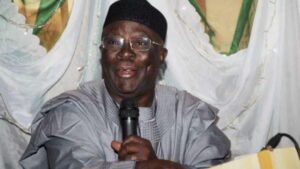 The Pan Yoruba socio-political group, Afenifere, on Tuesday, called on President Muhammadu Buhari to resign honourably.
Speaking during the 95th birthday of the leader of the group and the dedication of a church in the honour of Chief Reuben Fasonrati, the Acting leader, Ayo Adebanjo, asked Buhari to resign over his administration’s inability to address insecurity and economic challenges.

Pa Adebanjo accused the federal government of failing to address the increasing wave of insecurity and downturn of the economy.

YOU MAY ALSO LIKE:   Zoning may leave us with useless presidential candidates in 2023 - Sanusi

The Afenifere leader stated that Buhari’s government could no longer handle the situation, adding that this is the best to resign.

Adebanjo said: “I have told them that in a better and civilized country, he should have gone long ago.

“If he has self-respect, he should have gone because everything has failed.

“What is he presiding over? Is it over corruption, security, education?

“Law and order has broken down in the country for the past three years.

“It is only because Nigerians are over tolerance of despots, that is why he is still there.”

YOU MAY ALSO LIKE:   Heritage Bank, PWC, Deloitte canvass use of tech to rescind effects of Covid-19, tackle fraud

He lambasted the youth for failing the country and said “the younger generation has failed the country.

“The country was not as bad as this when we were demonstrating for self-governance.

“They want the old men to fight their cause for them. Why should people like me be in the trenches at 93 and Baba Fasoranti at 95? Where are those in their 40s and 30s?

YOU MAY ALSO LIKE:   LEADWAY ASSURANCE SHINES AT 2020 GREAT PLACE TO WORK AWARDS

“When we were at their age, we were in the street, at Lagos, London, everywhere.

“You are PDP in the morning, APC in the afternoon and SDP in the evening, and they say they are young, the youth should be ashamed of themselves.”