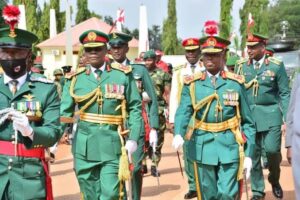 The Nigerian Army has described as untrue, reports from certain quarters that some officers and soldiers are planning to storm Abuja in protest of their poor working conditions, non-payment of entitlements and other issues.

The Army in a statement on Wednesday signed by its spokesperson, Brigadier-General Onyema Nwachukwu said the allegations could have been ignored but the clarification became necessary because of the weighty nature of the claims made and the need to tell Nigerians the truth.

He told members of the public to ignore the reports of any planned protest.

Nwachukwu in debunking the report, argued that the Nigerian Army has never had it this good in terms of welfare and equipment for the personnel which has in no small way contributed to the victories recorded against bandits, terrorists and other criminals.

He said generally, working conditions have improved while new measures are constantly being introduced to make life easier for the soldiers and officers of the Nigerian Army under the current leadership of Lt. Gen Farouk Yahaya.

According to him, some faceless persons who want to cause disaffection are the ones behind the reports of a planned protest.

The Army statement titled ‘PHANTOM REPORT ON PURPORTED DISQUIET IN THE NA OVER POOR EQUIPMENT, WELFARE, A FAILED ATTEMPT AT INSTITUTIONAL BLACKMAIL’ reads in full: “The attention of the Nigerian Army(NA) has been drawn to yet another mischievous report peddled by some online media, alleging serving officers and soldiers of the Nigerian Army are planning to storm Abuja, to protest over unpaid emoluments, poor working conditions and other unsubstantiated allegations.

“Judging by the unprofessional and irresponsible manner in which the release was made, citing faceless persons, it could have been ignored. However, the weighty nature of the claims demands some clarification for the sake of well meaning Nigerians.

YOU MAY ALSO LIKE:   ministers, VIPs stripped of police escort in Southeast, Southsouth

“It is on record that officers and soldiers of the NA under the leadership of Lieutenant General Faruk Yahaya, like never before, have witnessed exceptional positive changes in the moral and physical components of the force. It is, therefore, crucial to state in very clear terms, that the NA has never had it so good, given the quantum of combat and logistics equipment that have been injected into the theatres of operations, a circumstance that has evidently turned the tide against the complex array of threats facing the nation. This is in addition to welfare packages introduced by the current leadership of the NA.

“More also, aside prompt payment of salaries and operational allowances, welfare flights have been inaugurated, which significantly reduced the burden of troops travelling in and out of the theatres to see their loved ones. This is also in addition to huge commitment on the medical needs of wounded-in-action officers and soldiers and the barracks communities. Scholarships are also being awarded to children of officers and soldiers killed in action in the ongoing operations.

“It is worthy of note, that across all NA Barracks there are deliberate efforts at providing conducive working and living conditions for troops and their families. These interventions in the form of massive barracks construction and renovation works, with visible footprints are bringing succour to NA personnel nationwide.

YOU MAY ALSO LIKE:   “Nigerians deserve Buhari” – Reno Omokri reacts to video of Pere’s fans protesting over BBNaija’s twist

“The desperate effort by the authors of this unpatriotic report to give ethnic and religious coloration to the activities of the NA, is nothing but an inglorious attempt to woo unsuspecting members of the public with bigotry bargains, laced heavily with evil intent. It must be made crystal clear that the NA remains a symbol of national unity and therefore cannot afford to be divided along ethnic or religious lines.

“Suffice to state that the NA under the current leadership has remained resolute in carrying out its constitutional role and will vigorously continue to implement welfare programs for the benefit of all personnel. Troops deployed in ongoing operational engagements are putting in their best for the nation and should be encouraged, rather than plotting disaffection amongst them. All personnel are urged to remain steadfast and unswayed by the antics of unpatriotic elements, who for selfish gains want to plunge the nation into chaos.”