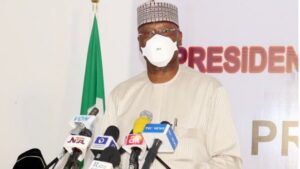 The government also raised the alarm over reported racketeering of the Oxford-AstraZeneca vaccines in some vaccination centres.

The SGF said, “The disclosure that Nigerian Scientists have produced at least two local COVID – 19 vaccines which are awaiting clinical trials and certification is significant. I call on all relevant agencies to provide the required support and an enabling environment for smooth conduct of the remaining protocols for the certification of these vaccines with a view to encouraging and motivating other researchers.”

The PTF chairman recalled that one year ago on March 21 2020, a total lockdown was declared by the government in some parts of the country due to coronavirus pandemic that hit the nation.

He said, “In the past one year, the socio-economic impact on us cannot be underestimated. Many people lost their livelihood and many people lost loved ones.”

The SGF also said that on Sunday, Nigeria recorded the lowest number of cases so far this year.

He said, “We have also seen a decline in cases in the high burden countries around the African region. This does not call for us to lower our guards as the virus is still potent and virulent. This is the right time to adhere to the full compliance of the NPIs and be vaccinated.”

The SGF said on Sunday, March 21 2021, the PTF received 300,000 doses of the Oxford-AstraZeneca vaccines from MTN Nigeria.

He commended the organisation and urged other partners to contribute towards the fight against COVID-19.

The PTF boss added that in the past few weeks there were discussions on the KLM and Emirates Airlines services in Nigeria.

He said, “Today, I will like to inform you that KLM has commenced full operations in and out of Nigeria since 15 March, 2021 while operations of the Emirates in and out of the country has been suspended with exemption of Cargo and Humanitarian flights.”

Ehanire, represented by the Permanent Secretary, Abdullaziz Mashi Abdullahi, said the racketeering of vaccines was unnecessary because vaccination had been scheduled in phases such that frontline health workers and those at higher risk of the infection were vaccinated first after registration at the portal.

The Minister also said government met with the AstraZeneca group at the Federal Ministry of Health.

He said, “The outcome of the meeting was a reassurance of the safety and efficacy of the vaccine against Covid-19. We have not yet recorded unusual side effects among those who have received the vaccine which include me. NAFDAC is monitoring the process as part of a global tracking of adverse effects of the vaccine.”

YOU MAY ALSO LIKE:   Lagos Assembly to Sanwo-Olu: Ensure strict enforcement of COVID-19 rules

He, however said that Nigeria recorded 2,030 deaths.

Ehanire said, “In the last week, we have recorded a total of 1,080 cases. This is less than what was recorded daily during the second wave even with sustained testing. While this is good, we shall not on account of this, rest on our laurels for it is still too early to do so.”

He added that government had commenced investigation of alleged mismanagement of vaccine in some vaccination centres, including the police clinic in Falomo, Lagos State.

Shuaib, who spoke during the press conference of the Presidential Task Force on COVID – 19, assured that the procurement of vaccines would be done with utmost transparency.

He said, “Some of the information reaching us from the states is that there are reports of alleged vaccine mismanagement at some vaccination sites, including the Police Clinic, Falomo, in Lagos state. This is currently being investigated and we understand from the Lagos State Government that a report would be made available today.

“We anticipate that decisive action will be taken against anyone found culpable of subverting the vaccination process.

So, we do expect full application of the accountability mechanism. Beyond this case, the Federal Government is following closely on its vaccine accountability framework to ensure that similar cases of vaccine mismanagement and other sharp practices are quashed.

“We have established a collaborative partnership with regulatory and anti-corruption agencies to further strengthen vaccine accountability.

“We have also instituted mechanisms to ensure that the roll out of the COVID – 19 vaccines in all the states is equally free from corrupt practices. Therefore, any information of vaccine mishandling and mismanagement will be handled using stringent measures and appropriate sanctions.”

Speaking on concerns raised on the safety and efficacy of the Oxford/AstraZeneca vaccine presently used for vaccination in Nigeria, Shuaib reiterated that the World Health Organisation was unequivocal in urging countries in Europe and globally to continue its administration.

He said that out of the 122,410 people who have been vaccinated with the Oxford/Astrazeneca vaccine, “no Nigerian so far has developed any known severe side effects following vaccination with the AstraZeneca COVID-19 vaccine.”