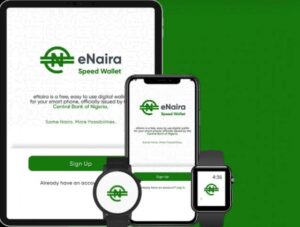 The eNaira, which was launched 24 days behind schedule, has recorded more than 5000 downloads on Google Playstore and 442 reviews by downloaders, who rated the Central Bank Digital Currency (CBDC) mobile app 2.3 out of five.

The eNaira was launched by the President on Monday.

But the latter was common among individuals who had downloaded the App.

Attempts by Ripples Nigeria to log into the App were unsuccessful with the message below appearing on the system.

A quick check on Google Playstore showed a series of complaints with one Nkwachiukwu Cornelius stating: “I am being asked to sign up through my bank only. Is there no other alternative method for signing up? I have tried signing up through my bank but the system is having a problem verifying BVN.”

YOU MAY ALSO LIKE:   CBN’s E-Naira Speed Wallet Disappears From Play Store Two Days After Launch

Another user, Blessing Kay Fash, said: “A great initiative from CBN. However, 2 stars because l am unable to sign in after passing through the first steps of registration using my bank, full name, phone number, and BVN. Not knowing what is happening!”

Etubi Paul retorted: “After filling my details (Names, BVN, DOB, Account Number) it brings a red pop-up message that says, ‘We have encountered a problem with the BVN validation service.’ Pls work on this. The 2 STAR is for the availability of the app in the first place though.”

Biletiri Andrew said: “My BVN is not verified, please how this error can be rectified? It keeps telling me I should try again later or contact support.”

Titilope James lamented, “I give one star only. I tried my best to register but keep saying TOO MANY FAILED ATTEMPT ON BVN. Pls help me out.”

On his part, Chinedum Emezie said: “Very poor app, I filled in all my details correctly and yet it keeps telling me that my account number is incorrect even though it is after several trials it now tells me to contact customer support. Too many attempts were made with the same BVN. Very poor and how can I get this solved.”

Hassan Ahmad noted: “The steps are too much for an average person. Why can’t you just register people with their BVN? I have put all details but it’s saying the first name doesn’t match.”