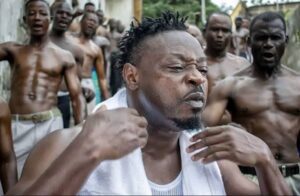 Several reactions have trailed the announcement of spokesman to the popular hip hop star, Eedris Abdulkareem that his principal is currently battling kidney failure.
The singer’s situation was announced on his Instagram page by his spokesman, Hon. Myke Pam.

Pam noted in the message that Abdulkareem will have a surgical operation at the end of July and hence would need prayers and good wishes from Nigerians.

According to him, the singer has been undergoing dialysis since the ailment was discovered. Pam, however, said there is no cause for alarm as Abdulkareem is eager to get done with the surgery and return to the musical stage in due course.

He stressed that the activist is full of life and in high spirit despite the situation.

Following the announcement, some netizens took to social media platforms to offer some prayers for the veteran singer.

See some of the reactions below;

rediva.waistshaperz wrote; ‘‘Smoking and Alcohol was too much….I hope others learn”

ouchcleo wrote; ”Omoh. This life no balance. I wish him speedy recovery and successful transplant”

YOU MAY ALSO LIKE:   Coalition Of Northern Groups, Slams PSC, Demand Review Of Abba Kyari’s Suspension

ceo_yemadexoil wrote; ”God over everything”

ha_yor_midey_ wrote; ”God we protect you in Jesus name”

lenny90210 wrote; ‘‘U don insult all them ur helpers finish. May God grand you recovery. Amen.”