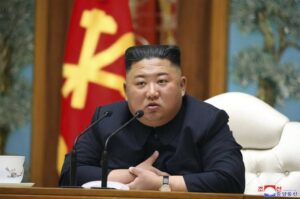 North Korean citizens have been banned from laughing, drinking alcohol, or showing any form of happiness for 11 days as the country marks the 10th year anniversary of the death of former leader, Kin Jong Il who died in 2011.

Kim Jong Il ruled North Korea from 1994 until his death in 2011, and was then succeeded by his third and youngest son, current leader Kim Jong Un who has now become a maximum dictator.

Kim Jong Il died of a heart attack on December 17, 2011, at the age of 69 after ruling the country for 17 years in a brutal and repressive dictatorship.

The order which was released on Thursday, mandates citizens to observe the “11-day period of mourning where they are not allowed to laugh, drink alcohol or make merriment of any form.”

A North Korean resident who spoke with Radio Free Asia (RFA), was quoted as saying:

“During the mourning period, we must not drink alcohol, laugh or engage in leisure activities.”

The resident added that during the mourning period, “North Korean residents and citizens are not allowed to go grocery shopping, especially on Friday, December 17, the anniversary of Kim Jong Il’s death.”

“In the past, many people who were caught drinking or being intoxicated during the mourning period were arrested and treated as ideological criminals. They were taken away and never seen again,” he said.

“Even if your family member dies during the mourning period, you are not allowed to cry out loud and the body must be taken out after it’s over.

“People cannot even celebrate their own birthdays if they fall within the mourning period.”

Another source, a resident of the southwestern province of South Hwanghae, said police officers were told to watch for people who fail to look appropriately upset during the mourning period.

YOU MAY ALSO LIKE:   We are Considering Taxing Soft Drinks - Finance Minister

“From the first day of December, they will have a special duty to crack down on those who harm the mood of collective mourning.

”It’s a month-long special duty for the police. I heard that law enforcement officials cannot sleep at all.’

Previous UPDATE: Body of Lekan Odunare Who Plunged into Lagos Lagoon Has Been Found
Next Breaking: Former NLC chairman is dead