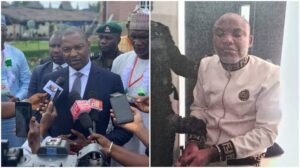 The Federal Government of Nigeria has accused that leader of the Indigenous People of Biafra, IPOB, Nnamdi Kanu of ordering the burning of a house belonging to Imo state governor, Hope Uzodinma and instigating the looting of the Oba of Lagos Palace during the #EndSARS protests.

This was contained in a statement on Friday by the Attorney-General of the Federation, Abubakar Malami. The government claims that Kanu hijacked the #EndSARS protests and used inciting statements to compel members of his group, IPOB to attack security agents and destroy public property.

The statement, sent to POLITICS NIGERIA, read in part; “The destructive activities of IPOB/ESN pose serious threat to Nigeria’s National Security and its corporate existence, which resulted into re-arrest of Nnamdi Kanu and members of his group.”

“The Committee, inaugurated by the President, and Commander in Chief of the Armed Forces, Federal Republic of Nigeria, Muhammadu Buhari (GCFR), was headed by the Honorable Attorney General of the Federation and Minister of Justice.”

“The Committee finds as a fact, that consequent upon the instigating directives of Nnamdi Kanu, members of IPOB/ESN carried out massive attacks on democratic institutions especially INEC Facilities with a view to hampering democratic process in Nigeria. These attacks that were carried out between October 2020 and June 2021 include the following:

“That the Headquarters of the Nigerian Immigration Service (NIS), Umuahia, Abia State was also attacked by IPOB/ESN leading to the death of one (1) officer;”

“That there were several IPOB/ESN attacks and destruction (arson) of public and private properties during the EndSARS and Biafra agitations across the country, especially in the South-East and South-South regions, notably the Palace of the Oba of Lagos where twelve (12) flats were completely looted and vandalized, the country home of the Governor of Imo State, Senator Hope Uzodinma, was burnt, over one hundred and fifty (150) buses burnt at the Lagos Bus Terminal, Sen. Ndoma Egba’s home in Calabar Municipal, Cross River State, was completely looted and vandalized, Lagos State DNA and Forensic Centre, City Hall Race Course, First Bank Branch Lagos, Lagos State Public Works Commission, Nigeria Port Authority (NPA), Marina, Lagos, High Court Igbosere, Lagos, were all burnt, amongst other heinous crimes committed.”

YOU MAY ALSO LIKE:   Stakeholders Offer Security Options At NAOSRE Dinner Night