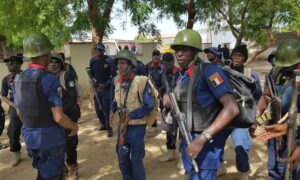 Two personnel of the Nigerian Security and Civil Defence Corps (NSCDC) have been reportedly killed in Benue State in an encounter with gunmen suspected to be terrorists.

Naija News learnt that two other locals were also killed in separate attacks in the state.

It was reported that the NSCDC personnel were attacked at their duty post at a waterside vicinity in the Wadata axis of Makurdi Local Government Area on Friday.

A resident who spoke with Daily Trust confirmed that the other two villagers were hacked to death in the evening hour of Thursday while working on their farms in Tse Tume in the Turan council ward of Logo LGA of the state.

He told reporters that their remains had been recovered and buried on Friday.

On the account of the NSCDC officers killed, the Public Relations Officer of the security agency in the state, Michael Ejelikwu, promised to give details of the incident in later hours.

When contacted, the Police Public Relations Officer (PPRO) for Benue Command, SP Catherine Anene said, “That was not reported to me.”

YOU MAY ALSO LIKE:   Six People Abducted As Unknown Gunmen Attack UNIABUJA

Meanwhile, at least five persons have been killed in Anambra State when some unknown gunmen attacked a popular drinking joint on Friday night.

The assailants according to reports, stormed a restaurant situated at Uto Ndu in Obiofia Village, under Nnewi South Local Government Area of the state at about 8:00 pm and started shooting sporadically.

The owner of the restaurant identified simply as Ụtọ Ndụ (a female) was also killed in the attack, Naija News learnt.

Sympathisers, friends and some relatives of the victims have taken to social media to mourn their beloved family members.

Remains of the victims have been reportedly transported to a mortuary while security operatives launch a hunt on the perpetrators.