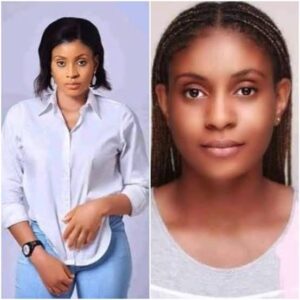 The death of a female corps member, Stephanie Se-ember Terungwa Edward Achado, who was declared missing in the Federal Capital Territory on the 14th of April has been confirmed by the National Youth Service Corps (NYSC).
The family of the late corps member had declared her missing in a post on social media.

It was reported that Stephanie went missing after leaving her apartment for Community Development Service (CDS).

YOU MAY ALSO LIKE:   Lagos driver crushes LASTMA official to death

However, her body was reportedly found on Wednesday, still dressed in her NYSC uniform, while some of her vital parts had been removed by the killers.

NYSC in a statement released on Facebook noted that Stephanie’s face was defaced beyond recognition.

The statement reads, “The attention of the NYSC Management has been drawn to the pictures making the rounds in the social media of a missing Corps member deployed to the Federal Capital Territory, Abuja.

“The corpse was found wearing the NYSC khaki trouser, with the face defaced beyond recognition.

“On account of this, Management reported the discovery to relevant security agencies to help identify the body. It was later confirmed that the remains were that of a missing Corps member, Stephanie Se-Ember Terungwa, with State Code Number FC/21B/5807.

“Investigations are, however, currently ongoing to unravel the identity of the perpetrators of the dastardly act to bring them to justice.

YOU MAY ALSO LIKE:   Jonathan Unveils New Sports Club In Nigeria

“May her soul rest in peace.”