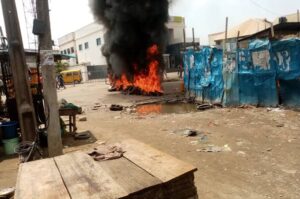 Some commercial motorcyclists have reportedly clashed with the security agents attached to the Lagos State Joint Task Force enforcing ban on okada in some local government areas of the state.

It was gathered that some okada riders at the Idi Araba area of Lagos engaged the armed security men in a clash while making attempt to prevent the seizure of their motorcycles.

YOU MAY ALSO LIKE:   2023: Another pastor buys N100m APC presidential form

The recalcitrant riders reportedly made bone fires on the road and some of them were said to be armed with clubs and some dangerous weapons while trying to stop the security agents.

Thousands of motorcycles have been seized and destroyed by the task force before today.

The PPRO said, “The task force went for the operations well prepared. They (riders) were just causing a scene after task force left with some of their impounded motorcycles.”

Hundeyin said the Rapid Response Squad (RRS) and men from the Area Command have been drafted to the scene. He added that there was nothing to worry about while urging residents to go about their businesses.