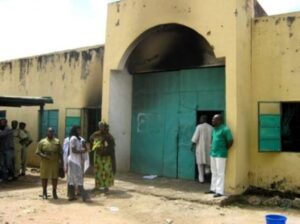 At least one inmate died, while 12 others were injured, during a fight that snowballed into an attempted jailbreak at the Port Harcourt Correctional Centre on Monday.

It was gathered that two inmates were engaged in a fight, which led to the death of one of them, even as a protest ensued amongst other inmates.

YOU MAY ALSO LIKE:   Edo Assembly Invasion: APC demands arrest and prosecution of Adjoto, Iyoha, for mobilization and illegal arming of thugs

The situation spiraled as many inmates tried to scale the facility’s high walls, but were repelled by a combined team of security operatives who shot outside the fence, with 12 of them sustaining serious injuries.