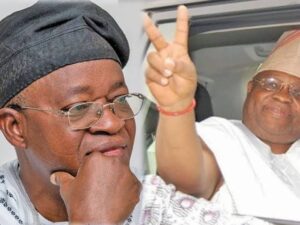 Speaking at his re-election campaign held at Ibokun and Oriade constituency on Wednesday, the All Progressives Congress candidate, said Ademola Adeleke lacks the capacity to govern the state.

While making a mockery of the senator, Oyetola said governance is a serious business for serious-minded people and not a dancing competition or child’s play.

The governor claims that, given the numerous difficulties the state is currently facing, it takes divine wisdom and a person with a solid understanding of the art of governance to govern the state.

YOU MAY ALSO LIKE:   Onyeali-Ikpe’s Seven Point Agenda: Building A Future-Ready Fidelity Bank

Oyetola concluded that he is endowed with the quality and wisdom of how to govern Osun State.

2face during the meeting urged the candidates to advise their supporters on the need to shun violence during the election.

Idibia persuaded Governor Adegboyega Oyetola of the APC, Senator Ademola Adeleke of the PDP, and Akin Ogunbiyi of the Accord Party to sign a peace pact, pledging their commitment to a peaceful election, during separate meetings.