Home / cover / Osun: I’m Not An APC Member, I Only Work For The APC Government – Femi Adesina

Osun: I’m Not An APC Member, I Only Work For The APC Government – Femi Adesina 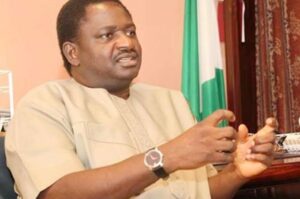 The special adviser to President Muhammadu Buhari on media and publicity, Mr. Femi Adesina has denied being a card-carrying member of the ruling All Progressives Congress (APC).
Adesina on Thursday submitted that APC is only his preferred party but he is not a member of the party, adding that he is a Buharist as well.

Naija News reports he made the stand known in an article released on Thursday in which he reacted to those calling him out after the APC lost the July 16 governorship election in his home state of Osun.

YOU MAY ALSO LIKE:   Iheanacho Score Twice in Leicester City's defeat to West Ham United

This led many to start calling out APC stalwarts from the state including Adesina on how they couldn’t deliver their very own state.

However, Adesina on Thursday in an article titled ‘OSUN: BUHARI DOES IT AGAIN’ said though he would have preferred Oyetola as his preferred candidate to win the election, he is not a stakeholder in the Osun election as people painted it to be.

In his words, “I’m also a Buharist, a firm believer in the ideals of that honest man, the Mai Gaskiya from Daura, in Katsina State, though I am not a registered member of the All Progressives Congress (APC).

“It was, therefore, laughable for some people to try and rope me into Osun State politics, as the gubernatorial election held last Saturday. First, they came up with the news that Femi Adesina had lost his ward to the People’s Democratic Party (PDP). Which Femi Adesina. Me? Or another one? Do you lose what you don’t participate in?”

He further clarified that contrary to insinuations that the PDP defeated the ruling party in his ward, the APC actually won in his ward.

YOU MAY ALSO LIKE:   FG’s Livestock Plan, Fulani Herdsmen from Chad, Niger to benefit

“Out of curiosity, I checked. The APC had, indeed, won my ward, in the Post Office area of Ipetumodu by 176 to PDP’s 130 votes. But it didn’t matter. It just shows how heinous and petty some people can be,” he added.

On his membership of the APC, Adesina said while he is sympathetic to the party, he is not a registered member of the APC and those calling him out after the party’s loss in Saturday’s governorship election should be properly guided.

YOU MAY ALSO LIKE:   PDP Picks Taraba Senator As Bwacha’s Replacement

“My position is this. I work for an APC government, and it is my preferred party. But member? Not so. I have always rooted for good APC candidates and I would have loved if Governor Gboyega Oyetola had won in Osun last weekend,” he declared.

Adesina also added that he would most likely never be a member of the APC.

“Yes, APC is my preferred party, but I’m not a member, and won’t likely be, with my eyes set on farming and media work after leaving government service,” he added.

I Only Work For The APC Government – Femi Adesina Osun: I’m Not An APC Member 2022-07-22
Oluwasegun Adesuyi
Share

Tags I Only Work For The APC Government – Femi Adesina Osun: I’m Not An APC Member

Previous Buhari Govt To Spend N30.2 bn On NASS Complex Rehabilitation
Next ‘You Know Nothing About Nigeria’— Atiku Hits Back At Sowore Over $16bn Power Sector Embezzlement Claims