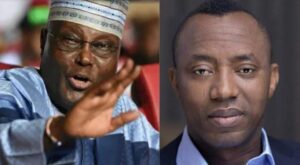 Atiku reacted in an interview on Arise Tv monitored by THE WHISTLER.

Atiku had on Wednesday, July 20, 2022 criticised the country’s energy crisis particularly, the collapse of the national grid for the sixth time in 2022.

He had tweeted, “I am reliably informed that there was a total National Grid Collapse at precisely 12:23pm today. This is one collapse too many. It is the 6th time this is happening this year alone.”

Sowere however accused the presidential candidate of spending $16bn to procure darkness for Nigerians.

“The National Electrical grid collapse started when you and Obasanjo invested $16bn to procure darkness for Nigeria, the @MBuhari regime came to gazette grid collapse as a law. Alhaji @atiku, don’t pretend that you care about the National Grid!” Sowore had replied.

Industry data from the Federal Ministry of Power in Abuja showed that power generation on the grid had reached a peak of 4,091.6MW on Tuesday, July 19, 2022.

It plunged to 3,921.8MW on Wednesday morning and later crashed to about 50MW leading to the collapse of the National grid.

YOU MAY ALSO LIKE:   You Can’t Win In Ukraine, Biden Taunts Putin After 570 Civilians Dead

But Atiku admitted that transmission was at 4,000MW before the government started investing $16bn in the power generation project. He blamed the failure to improve power supply on the distribution companies (DisCos).

“He is opponent what do you expect him to say? He has all along lived outside this country, he doesn’t even know the policy we implemented and even the policy initiative. When we came in, the total generation was about 4000MW, we initiated the building of nine additional power stations.

YOU MAY ALSO LIKE:   FIRSTBANK LAUNCHES SINGLE-DIGIT LOAN FOR WOMEN-OWNED BUSINESSES, REINFORCES ITS ROLE IN STRENGTHENING GENDER INCLUSION IN NIGERIA

“By the time those nine were finished, the capacity had gone up from four to about 13,000MW, but unfortunately, there was no corresponding increase as far as the transmission lines are concerned,” the former VP said.

He argued that when the transmission cannot evacuate the generation, “there is no way they will not collapse, so they kept on collapsing.”

The PDP flag bearer explained that the “nine additional power stations were completed by (Goodluck) Jonathan. Umaru (Musa Yar’Adua) was on it, he died and Jonathan continued and he completed them.”

“He (Sowore) doesn’t even know. What does Sowore know about this country? Nothing.”

Atiku also said during their tenure which ended 2007, he advised President Olusegun Obasanjo on the decentralization of power generation and transmission.

Atiku also revealed that his foreign exchange policy will be different from what is currently obtainable under the President Buhari administration.

Naira has depreciated to N635 per dollar at the parallel market, while the official Central Bank rate is N415.9 to the dollar.

The PDP candidate said the best possible option is to converge the parallel market rate and the official rate, a move he believes would solve the forex crisis.

“Exchange rate is CBN’s policy. I’m not expected to interfere in such, but what I expect to see is a convergence of the CBN exchange rate as well as the parallel market rate.

“I’m a market-oriented person. I believe in the forces of the market. This is what I expect the CBN to achieve- convergence of the exchange rate.”