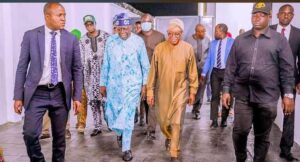 Vice President Yemi Osinbajo, the presidential candidate of the ruling All Progressives Congress (APC), Bola Ahmed Tinubu, are currently in Osogbo, the Osun State capital for the mega rally of the ruling party ahead of Saturday¡¯s governorship election.

APC governors and other party leaders are in the state to campaign for Governor Gboyega Oyetola¡¯s reelection.

The rally is scheduled to hold at the Osogbo Township Stadium.

In a statement on Monday, the Grand Rally Reception Planning Committee, Funke Egbemode, said the rally was not just a gathering of party faithful, but also of lovers of democracy and good governance.

YOU MAY ALSO LIKE:   BREAKING: Tinubu Campaign Council DG Dumps APC One Month After Warning Party

The statement reads in part: ¡°Leaders and chieftains of the APC, including the Vice-President of the Federal Republic of Nigeria, Prof Yemi Osinbajo, members of the central working committee, national campaign council, APC governors and other national and regional structures of the party are expected at the rally in support of Mr Adegboyega Oyetola, the party¡¯s candidate in the Osun governorship election.

¡°We trust that members of the APC will show the formidable strength and decorum the party is known for, even as we implore all residents and citizens of Osun to come out en-masse and in public acclamation of their overwhelming support for the APC candidate.¡±

Oyetola will on Saturday battle Senator Ademola Adeleke of the Peoples Democratic Party and Hon. Yusuf Lasun of Labour Party and others in the election.