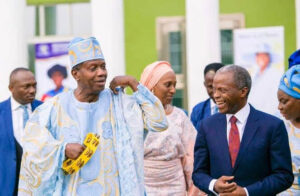 Recall that RCCG, Nigeria’s biggest pentecostal Church, had come under fire for setting up a directorate of politics, in what many see as a plan to back the unconfirmed presidential ambition of Osinbajo.

Speaking on Sunday, Pastor Adeboye said that he does not support any presidential aspirant ahead of the 2023 general elections.

Daddy GO, as he is fondly called by his congregation, said he needed to make clarification amid the criticisms against the church’s creation of a Politics Directorate and the instruction to members to be politically involved in the 2023 elections.

He added that politics is not his calling and he will never be a politician.

On the 2023 elections, Pastor Adeboye said he does not know if the 2023 general election will hold as scheduled.

The 80-year-old cleric quickly added that God might still speak to him about the 2023 general elections.

YOU MAY ALSO LIKE:   Oluwo Denies Requesting ₦20M From Oyetola For Wedding

Adeboye stated that his focus is on the Kaduna killings, oil theft, Nigeria’s depressing debt profile and other current national challenges.