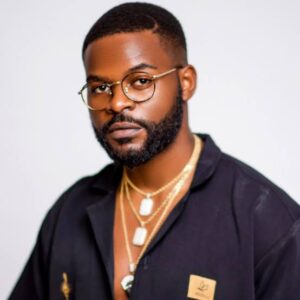 Nigerian singer and actor, Folarin Falana [Falz] has disclosed why he decided to opt-out of Funke Akindele’s soap opera, Jenifa’s Diary.
It will be recalled that Nollywood actress, Funke Akindele started her epic series of Jenifa’s Diary on April 15, 2015.

Akindele had featured both veterans and newbies in the series to create unimaginable scenes that have captured the heart of her lovers and fans.

Falz who took the role of Sege happens to be one of the major characters of the series.

However, as years go by, the singer has acknowledged that he can no longer appear on the movie set for Jenifa’s Diary due to his schedule.

The singer who spoke at an interview with Inkblot’s Meet & Greet said the schedule and timing of shooting are no longer in agreement with his personal schedule.

He said, “If I could be on the show every single episode, I would but it’s just schedule, timing, shooting, ah!

“People genuinely root for them (Jenifa and Sege). And there was a time that she had a bit of confusion in her life as per which guy she should pick and everybody was like Sege!

“Funke can build herself around characters that she’s working with and I have to say she’s one of the most, if not the most hardworking person I have come across in this entertainment industry. This woman, as we’re on set, she’s writing the next episode, she’s directing”, Falz said.

YOU MAY ALSO LIKE:   JUST IN: Notorious Bandit leader, Bello Galadima captured in Sokoto

The singer further revealed his love for filmmaking, expressing that he plans to make more films.

“I love filmmaking, that’s what I’ve come to realize. I really love the process of taking an idea and bringing it to life in the form of film. I really love that. So I think I’m definitely going to do a lot more. I don’t know the specifics. I can’t say for sure that I will go into directing.

YOU MAY ALSO LIKE:   Ekiti 2022: Drama As NSCDC Officers Allegedly 'Escape' With Vote-buying Money

“I’m already a filmmaker with House 21. We’re creating films, we’re creating different other types of content. Now writing I think I probably would get into it. That’s for sure. Ideas come to me already and with music, I already write music and it’s not the same, but having that kind of background, I think I’ll be able to write. But directing, you never know,” Falz added.