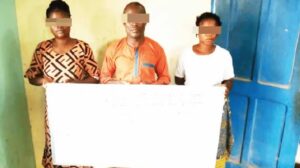 A 50-year-old pastor, identified as Isaac Akinbola and two female members of his church have been arrested by operatives of the Ogun State Police Command for allegedly assaulting his wife, Dasola Akinbola which led to the death of their eight-month-old baby, Obadiah Akinbola.
Men of the Ogun State Police Command arrested the cleric and two female members identified as Esther Olowolayemo, 29, and Oluwakemi Oshinbajo, 30, over the death of the child.

The development was confirmed in a statement released by the spokesperson of the state police command, Abimbola Oyeyemi.

According to Oyeyemi, the incident happened last Sunday and the cleric and the two female church members were arrested on the same day after the victim complained about the incident.

He said, “The arrest was made following a report lodged at the Awa Ijebu divisional headquarters by the pastor’s wife that she had been having disagreements with her husband over his illicit affair with some female members of the church for some time now.

“She explained that the said husband came to her house at the Ipinle area of Mamu Ijebu with two women, whom she had been suspecting of having illicit affair with him and asked them to beat her up.

“While they were beating her, her eight-month-old baby, Obadiah Akinbola, fell while her husband was urging the two women to beat her thoroughly.

“Upon the report, the DPO Awa Ijebu division, CSP Adewalehinmi Joshua, ordered the arrest of the three suspects, while the woman and her baby were taken to the Mamu Ijebu Health Centre for medical care.

“The woman and the baby were later referred to Blessed Hospital, Oru-Ijebu, where it was discovered that the baby had internal injuries which he sustained when he fell from his mother’s hands during the scuffle.

YOU MAY ALSO LIKE:   Toyin Abraham Paid Millions For Colleague’s Wedding Dress—Designer

“The child gave up the ghost on March 28, 2022, while receiving treatment as a result of the internal injuries.

“The remains of the child have been deposited at the General Hospital, Ijebu Igbo mortuary for an autopsy.”

He further stated that the Commissioner of Police in the state, Lanre Bankole, has ordered the suspects to be transfered to the Homicide Section of the State Criminal Investigation and Intelligence Department for further investigation and arraignment.