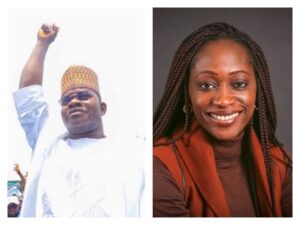 MKO Abiola’s daughter, Hafusat has landed in trouble with trolls on twitter after saying Governor Yahaya Bello has same qualities as her father.

She made this statement in an interview session following her appointment as the director general of Governor Yahaya Bello’s presidential ambition.

Several Nigerians have described this statement as unpleasant considering the status Abiola attained while he was alive compared to what Yahaya Bello has done in Kogi state.

Read some reactions below

The profile of Sister Hafsat in the struggle to sustain the legacies of her father is unquestionable;but comparing Bello to Abiola is oddly unconscionable and Bogus.

I agree. MKO Abiola the coup financier was a “hero of democracy” the same way Murtala Mohammed the genocidaire was a “founding father.”

It’s death that has sanitised and deodorised the stench surrounding these execrable men from Nigeria’s past. https://t.co/KB01QguiYG

MKO Abiola’s daughter really said that Yahaya Bello has same qualities with her father? Maybe we should send our gratitude to IBB for annulling that election.

Standards are so low we have people now comparing MKO Abiola with Yahaya Bello. Is Yahaya Bello ready to die for his priniciples – assuming he has any?

YOU MAY ALSO LIKE:   ZENITH BANK RANKED NUMBER ONE TIER-1 BANK IN NIGERIA FOR THE THIRTEENTH YEAR IN A ROW IN THE 2022 TOP 1000 WORLD BANKS RANKING

The campaign marriage between Hafsat Abiola, a Harvard Grad.and Yaya Bello reminds me of the Chude-Debola rebranding for Pres. Buhari..politics is such a beautiful thing because it pays little attention to morals but interests.

Where your heart is,
so shall your pocket be also.

Hafsat Abiola disrespected the late MKO Abiola by comparing her dad to
The Kogi thief!

…must you drag your late dad to your greedy-selfish-poverty-Pocket filled mission???

The only place left for Yahaya Bello is prison to answer all the corruption charges.

YOU MAY ALSO LIKE:   JUST IN: APC releases revised timetable for State Congresses

Seeing Harvard and Cambridge trained children of MKO Abiola and Chief Remi Fani Kayode doing hatchet job for someone like Yahaya Bello will always be awkward to me.

Hafsat Abiola, MKO Abiola’s daughter says she’s leading Yaya Bello’s presidential campaign because Bello shares some similarities with her late father. And to think that some of us have been looking at Bello with ordinary eyes fah. Issorite