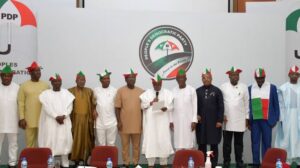 The Governors on the platform of the People’s Democratic Party (PDP) have warned the Economic and Financial Crimes Commission (EFCC) against witch-hunting opposition parties.

The PDP Governors’ Forum said that the recent invitation of officials of the PDP by the EFCC acting on a spurious petition by a disgruntled former member of PDP raises questions on the seriousness and impartiality of the anti graft agency to do its work.

The Governors in a statement by its Director-General, CID Maduabum said, “while PDP as a political party is accountable to its members and the general public for its actions, we are, however, concerned that the old tactics of using the EFCC to silence political opposition are creeping into our polity once again.

“We had expected that the EFCC under a new leadership will learn from the mistakes of its predecessors.

“It is a misplaced priority for EFCC to abandon revelations of monumental fraud by various officials and agencies of the Federal Government to pursue the PDP which is the main opposition party doing a yeoman’s job of preventing the descent into chaos and anarchy in Nigeria.”

The governors said that the assertive role PDP is playing is given the government a sleepless night, hence the action of the EFCC.

“Perhaps certain interests in government are worried about the increasingly assertive role the PDP is playing in calling out corruption in government and wants to weaken and silence it,” the governors said.

YOU MAY ALSO LIKE:   BREAKING: 13 soldiers killed by bandits in Kebbi

The governors said that PDP is up to date in making financial returns as required by the Constitution to INEC, “and we are not aware that INEC made any complaints to EFCC on PDP’s Returns.

YOU MAY ALSO LIKE:   Panic As Fire Guts Shops At Veritas Varsity

“The times are really perilous. We face existential threats as a nation and PDP shouldn’t be distracted from its main role as a political watchdog on behalf of Nigerians.”