Home / cover / Peace Imoisili On The Run As The Police Arrested Julius Olamide.

Peace Imoisili On The Run As The Police Arrested Julius Olamide.

The NIS, spokesperson, Mr Sunday James who disclosed that Olamide who has been in a hideout in Yola, Adamawa state over possible arrest for gay activities.

The suspect Julius Olamide, was arrested in Nigeria border with Republic of Niger in Illela local government area, Sokoto state.
according to NIS Olamide was trying to cross Nigeria border to Niger with a help of Mr. Garuba Alli , a human trafficker in the area while others managed to escaped.

Olamide and Garuba Alli was handed over to the Sokoto state command of Nigeria police.

Some policemen in Benin command, Edo state on July 31st, 2016 were immediately mobilised and getting to the scene ,they arrested 16 of them while Imoisili and Olamide managed to escaped from the scene.
Those earlier arrested on July 31st, 2016 are Paul Osahon,Endurance Igbinovia,okoro Joseph, David Edobor, Haruna Abas,Iziegbe Joshua and Ibrahim idris .

YOU MAY ALSO LIKE:   COVID-19: Heritage Bank joins WHO to celebrate health workers globally 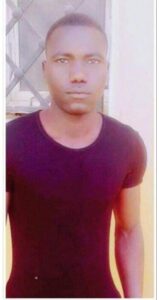 Olamide and Imoisili have been on the run and the police after a long time chase declared them wanted.

YOU MAY ALSO LIKE:   Sensational Liverpool ease past Norwich To Kick off premier league campaign

In a statement by the police, Julius Olamide will be charged to federal High Court in Sokoto for homosexual offence, while the where  of Imoisili is still unknown.

The police commissioner said they are working with other sisters security agencies and different institutions in the country to track and bring Imoisili to book and face persecution.

YOU MAY ALSO LIKE:   APC convention: Shittu Loses Out As Omisore, Kekemeke 11 Others Make South-West Unity List

The practice of gay or homosexuality or same sex marriage is a criminal offence which attracts 14 years in imprisonment on conviction.

In the 12 Northern state’s that has adopted Sharia law (Bauch,Borno,Gombe,kano, zamfara, katsina, kaduna, sokoto, Niger,kebbi Yobe,Jigawa)punishment for same sex activity include execution by stonning, as well as canning and imprisonment

The police, therefore, call on members of the public to reports all gay activities to the nearest police station wherever they are seen.

He added that gay in Nigeria usually face mob attack if suspected as both Christians and Muslims, in the country hate gays sex-same union.

The police said they have so far arrested 17 persons what 16 convicted in September 2019 before apprehending Olamide who has been on the run since August 2016.

Tags Peace Imoisili On The Run As The Police Arrested Julius Olamide.