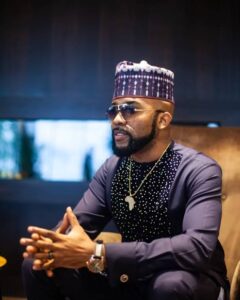 Singer Banky W has said the people who should be in jail or in exile are the ones seen on campaign posters during election season in Nigeria.

The singer who ran for House of Representatives on the platform of the Modern Democratic Party in 2019 said this on Nigeria Info FM’s Daily Digest programme monitored by The PUNCH on Tuesday.

He said his political ambition was driven by frustration with the political status quo and the plight of young Nigerians who don’t even know who their representatives in government are.

On why he ran for office, he said, “The first person I spoke to was my wife. I said we can’t sit around during election season and people who should be in jail or on exile are the ones on the campaign posters around and also the ones who keep getting into these powerful offices in the country.”

He said his wife expressed belief in his ambition but pointed out that politics is dirty and dangerous.

The singer continued, “I said, well, it will always be dirty and dangerous if everybody who is good, credible and with good interest at heart forever sits out of the process. This will leave the scum of the earth that we have here to occupy the seats and then we’ll turn around and complain that Nigeria is bad.”

He also spoke on why he didn’t run for office on a popular platform like the All Progressives Congress, the Peoples Democratic Party, or rely on a godfather

According to him, “The battle in Nigeria is not between APC and PDP, it’s between the political class and everybody else because APC and PDP tend to be the same. Their members are just jumping back and forth, and the parties don’t have ideologies per se, they are just platforms that people use to leapfrog into power.

YOU MAY ALSO LIKE:   Offerings is Necessary but not Compulsory - Prophet T.B. Joshua

“So, there was that frustration with the political status quo. Also, wanting to stand up for something, represent a different set of ideas and reach out to the younger generation that does not believe in either of those two platforms, to try and put ourselves together and push back against these things to show what is possible and what can be done.”

YOU MAY ALSO LIKE:   BREAKING: Buhari arrives in Imo for commissioning of projects

On the Independent National Electoral Commission deregistering the Modern Democratic Party, Banky W stated that it was a good thing.

He said, “I felt like there were too many political parties. Having 90 political parties is a little bit ridiculous. The deregistration forces us to either come together or start to infiltrate the major political parties and start to make those changes from within. But if you have over 90 platforms of people pushing, invariably we’ll just empower the two major parties to continue the way that they are.”

YOU MAY ALSO LIKE:   Gbenga Adeyinka Commiserates with Oyo Former First Lady over Mother’s Demise
People who should be in jail or in Exile are Always on campaign posters - Banky W 2021-08-17
Oluwasegun Adesuyi
Share