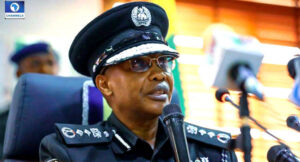 The Inspector General of Police, Usman Baba Alkali reportedly rejected a report by a panel setup to investigate the indictment of Deputy Commissioner of Police, Abba Kyari by the Federal Bureau of Investigation, FBI.

According to Punch, the IGP rejected an earlier report submitted by the four-man Panel led by Deputy Inspector-General of Police in charge of the Force Criminal Investigations Department, Joseph Egbunike.

It was earlier reported that Kyari got into trouble after a US court issued a warrant for his arrest over his alleged involvement in a $1.1m Internet fraud allegedly perpetrated by an Instagram influencer, Abbas Ramon, popularly known as Hushpuppi and four others; AbdulRahman Juma ; Vincent Kelly Chibuzo (Kelly); Rukayat Motunrayo Fashola; and Bolatito Agbabiaka.

The FBI claimed that Kyari detained Chibuzor at the behest of Hushpuppi for one month to enable the latter and his co-conspirators to fleece their Qatari victim of over $1m.

However, Kyari has appeared before the panel several times since it was setup and has fiercely defended himself against the allegations.

The Panel submitted a report to the IG last week but was rejected for being to ‘lenient’ on the Super Cop.

The panel resubmitted another report on Monday after the IGP expressed discomfort with panel’s earlier findings and recommendations.

Previous Taliban Renames Country Islamic Emirate Of Afghanistan As US Evacuates Citizens, Others
Next People who should be in jail or in Exile are Always on campaign posters – Banky W