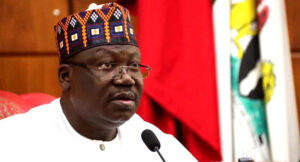 Nigeria’s Senate President Ahmad Lawan has finally spoken an an alleged $10 million bribe offered to members of the House of Assembly to pass the controversial Petroleum Industry Bill.

Lawan debunked the report while addressing State House correspondents after a closed door meeting with President Muhammadu Buhari in the Presidential Villa, Abuja on Monday.

He expressed dismay at the way and manner that some citizens had been spreading fake news and misinformation against the NASS and the government.

Sahara Reporters had reported that the leadership of NASS had been allegedly accused of taking bribe to pass the Petroleum Industry Bill.

According to Sahara Reporters, the Senate President, Ahmad Lawan and the Speaker of the House of Representatives, Femi Gbajabiamila were paid in dollars to ensure the passage of the PIB which was signed into law on Aug. 16 by President Buhari.

However, the senate president said: “People say anything or everything about the President, about the administration, about members of National Assembly, they call us names and this is part of the intangible dividends of democracy.

“But we are determined to ensure that the space is wide open for everybody to say whatever he wants to say.

YOU MAY ALSO LIKE:   ANALYSIS: Why Nigerians may NOT support submission of Phone ID Numbers to FG

“But I will advise that don’t say things that are bad because people are in the habit of…and recently somebody said 10 million dollars was given to the Speaker and the Senate President to give to members of the National Assembly to pass three per cent host community development fund.

“That is funny, but also very serious.

“I really want to take this opportunity to take exceptions to those kinds of unwarranted, false and fake information being fed to the Nigerian public and the danger people will face with this is you cause unnecessary damage to the reputation of people.’’

Lawan recalled how he filled legal suit against someone (name withheld) who allegedly spread similar falsehood against him.

“I had an occasion to take someone to court because of this kind of thing about three months ago.

“But Nigerians are better judges than anywhere else. So, the freedom of expression is there, probably more than anywhere in the world, but I want to caution that Nigerians should always think positive about their leaders, administration and governments.

YOU MAY ALSO LIKE:   How Major General Faruk Yahaya Became Nigeria’s 26th COAS May 26 On Merit

“And if they have issues they feel very strongly about, let them speak the truth and we are prepared to tell corrections, and that we feel should be able to make us do better,’’ he added.

On the massive surrender of Boko Haram insurgents, Lawan expressed satisfaction with the new strategies adopted by the armed forces and other security agencies in tackling insurgency in the Northeastern part of the country.

He said the massive surrender by members of the Boko Haram sect was a clear indication that the war against insurgency would soon be over.